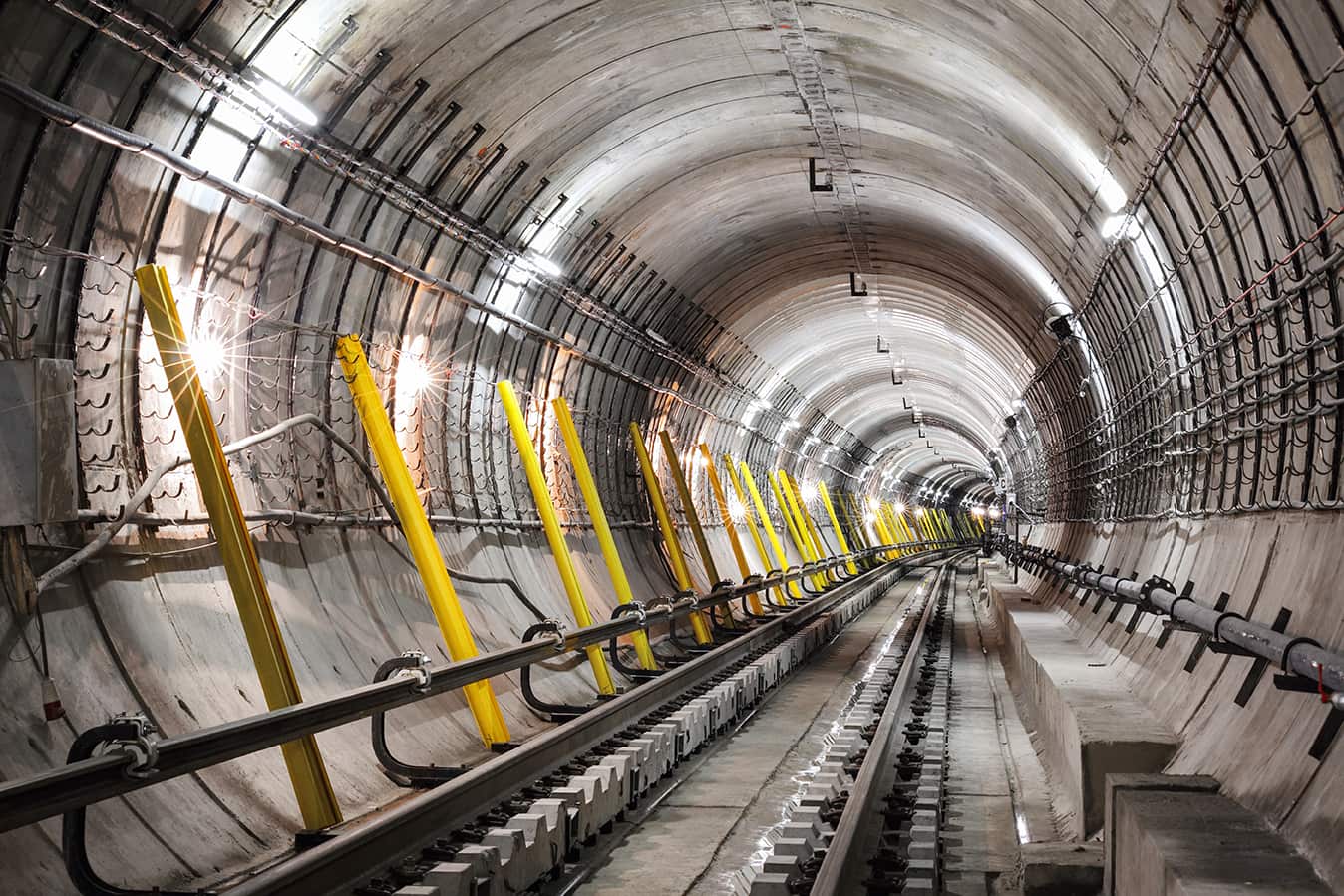 Underground construction is a complex engineering challenge. Conditions are always variable and, occasionally, extreme. Not only do engineers and construction teams have to account for cramped work sites and lack of natural light, there are also temperature variations, complex ground conditions and geometry, high humidity and the potential for large volumes of standing or running water.

Then there is the potential for extremely limited windows of opportunity to complete some projects, such as tunnels, roadways or bridges that need to reopen to traffic as quickly as possible – often in a few hours.

Concrete made from traditional cement is often the largest construction material in major projects, while its curing time has traditionally made it the most time-consuming component. This relatively inexpensive material has been popular for use in underground construction and repairs since the 19th century due to its stability, strength and ease of application.

Traditional cement (Portland Cement) requires quite a lot of water for workability, and has longer set times unless chemically induced with concrete admixtures, and may have some shrinkage. Specific additives can accelerate setting times, but these can be expensive, have a short shelf life and require additional handling equipment to keep it in suspension on site.

This is where Belitic Calcium Sulfoaluminate (BCSA) cement comes into its own. It is characterised by its fast curing time and strength development, durability and reduced shrinkage. These properties, uniquely suited to the harsh environment of underground construction, have seen BCSA emerge as an innovative alternative to traditional cement for tunnelling and underground construction projects.for

BCSA cement has been used as a concrete repair material in the US since the 1970s as well as in the construction of roads and runways. BSCA was introduced into Australia in 2007 and has been used as a concrete repair product and on International Airports and Roadways since its introduction into Autralia. It has been utilised in the replacement of large sections of concrete pavement at Melbourne and Sydney airports in Australia since 2007 and are some examples of BCSA cement’s unique benefits in projects with tight deadlines where rapid strength gain is imperative.

Runways, Thresholds and Taxiways were closed during night-time periods. Sydney Airport curfew from 11pm to 5am, Melbourne 11pm. Rapid-setting CSA cement concrete was poured, cured and reached sufficient strength for the areas to reopen 2-3 hours from placement of BCSA. In all applications and for more than 10 years (Sydney Airport), the areas remain in near perfect condition and fully operational.

The benefits of BCSA cement

The difference between BCSA and traditional cements is in its chemical composition. It’s active compound, Calcium Sulfoaluminate (hence the name), is also called Klein’s compound, after Alexander Klein, who invented it in the 1950s. This compound causes the rapid development of ettringite needles within the structure of the cement paste during the hydration process, resulting in rapid strength gain.

Concrete made using BCSA cement is not only durable, but sets in 20 minutes, eliminating the need for accelerating admixtures. It can, however, be retarded for up to 45 minutes if more working time is needed. It has high early strengths (20MPa at 1 hour, 35MPa at 3 hours and 55MPa at 24 hours in laboratory trials), low shrinkage and no bleed water due to the water needed for hydration being absorbed in the structure of the cement. BCSA is also very resistant to sulfate and bacterial attack – a common problem in sewer system pipes.

Reduced carbon footprints are a priority for industries and individuals around the world. This is where BCSA cement also has an important part to play in modern construction methods. A study at the University of Oklahoma found BCSA concrete to have a 100-year plus lifecycle which, with its chemical composition, gives it a significantly smaller carbon footprint compared to other cement products.

More than a building material

BCSA cement grout can be used for grouting, shotcrete and repairs.

More than a building material

BCSA cement grout can be used whenever non-shrink grouts are required. It has been used for cable bolting, rock bolts, anchoring and in post-tensioning. BCSA cement grout is formulated to flow easily, have low-shrinkage and high strength, making it ideal for equipment setting.

BCSA concrete’s rapid setting property makes it an excellent choice for shotcrete and pipe liners in storm water pipes, culverts, and manholes. Because it sets quickly, shotcrete made using BCSA cement does not require accelerating admixtures. It also works especially well in underground mining, when it is necessary to move in and out of an area quickly. BCSA cement shotcrete can often be sprayed as a relatively thin layer because of its high strength and bonding characteristics. This means less downtime for mining crews.

BCSA concrete’s rapid setting property makes it an excellent choice for shotcrete and pipe liners in storm water pipes, culverts, and manholes. Because it sets quickly, shotcrete made using BCSA cement does not require accelerating admixtures. It also works especially well in underground mining, when it is necessary to move in and out of an area quickly. BCSA cement shotcrete can often be sprayed as a relatively thin layer because of its high strength and bonding characteristics. This means less downtime for mining crews.

This unique building material is growing in popularity with engineers, particularly in the underground construction and mining industry, due to its fast set time, high strength, low porosity, high chemical stability and sulfate-resistance.

BCSA Cements are available worldwide, including Australia, where it is sold under the name “Rapid Set Cement.” This is not to be confused with the rapid set concretes sold in hardware stores, which do not contain the Belitic Calcium Sulfoaluminate chemical compound and therefore do not exhibit its properties of strength and durability.